Best They Could Get Accepts Republican Nomination 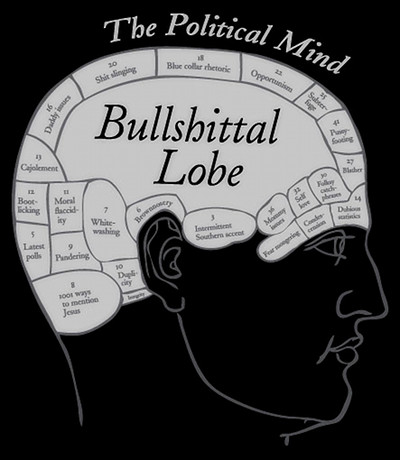 After a groundbreaking two-year study, scientists at the Princeton Neuroscience Institute announced today that they have made critical breakthroughs in understanding the political mind.

In addition to the four major lobes of a normal brain, researchers found that many politicians have a fifth lobe, comprised of a mysterious "brown matter."

"This 'bullshitallal lobe,' as we call it, enables many of the cognitive skills vital to a politician, including doublespeak, flip flopping, pussyfooting, fear mongering, blathering, brownnosing, bootlicking, shit slinging, and the ability to portray oneself as 'blue collar' despite owning a 500-foot yacht with a built-in squash court and helipad" said Dr. Steven Henkley, who directed the study.

The study also revealed that there is an entire section of the political mind dedicated to finding ways of bringing "my relationship with God" into conversation.