Becoming a successful artist often takes years of training and study, something that white people are fully capable of doing. It also requires a degree of ability and talent, which is something that white people are capable of believing that they possess innately, even though that probably isn't true. But that doesn't stop them in their need to be seen as creative. What they need is some sort of system whereby they do not need any actual talent but can still create something that is considered to be artistic.

For a photograph to be considered art, a white person need only take a blurry picture of a skyline, blow it up, then mount it to their wall. If they take the same photo with a vintage camera, specifically a Leica, then it is groundbreaking.

This need to create art by simply pushing a button has spawned one of the most popular iPhone applications in history: Hipstamatic. It gives white people all the effect of shooting something with a vintage camera without all the mess of developing film or actually having to own a vintage camera. Now a white person can take a picture of their friend looking out the window of a bus or a train and it doesn't look pretentious. Well, it still looks pretentious but at least it looks vintage pretentious, which is often known in white circles as "the good kind."

In addition to this artistic photography, white people have also started to take pictures of their food before they eat it. Some white people do this as a spiritual tribute to the food they are about to eat, but most white people do it so they can post to Facebook or Twitter and prove to their friends that they ate from a cool food truck before it became too popular. 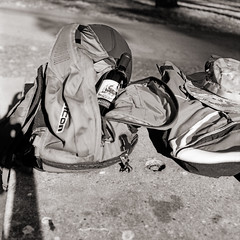